I ran a quick campaign with Laurent aka Slaanesh Child few days ago, weekend format is my favorite way to deep dive in a gaming trip with friends. Tree interconnected battles with progressive army lists. No heavy campaign rules, just easy peasy (lemon squeezy!) rules to give cool benefits for next battles. Played with the Warhammer 40.000 2nd ed rule set with a large amount of gorgeous Old School RoC models!

Background : Energies are precious resources for the legions. Dedicated troops are constantly seeking for across the galaxy in order to provide the materials and energies required for endless conflicts. Renegade legions have also to deal with it and my next blogposts going to report the clash between Emperors Children’s and World Eater’s legions.

The planet where the struggle take place contain plenty of ores which ones are significant sources of energies once refined. Planet residents are specialized in this process, the complexity of the method isn’t accessible the chaotic Marines and the residents will have to be forced to share the riddle of the refining with their invaders.  Unfortunately, for the Renegades, the major part of the inhabitants fled. Both Legions are now on chase to get theirs hands on the last runaways able to run the refining plants. 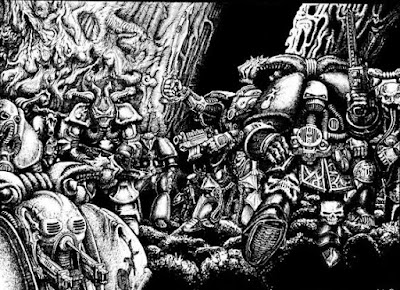 During their flee the technical staffs from refineries abandoned precious materials, both legions sent-out scouting platoons to seek those crates full of priceless information. 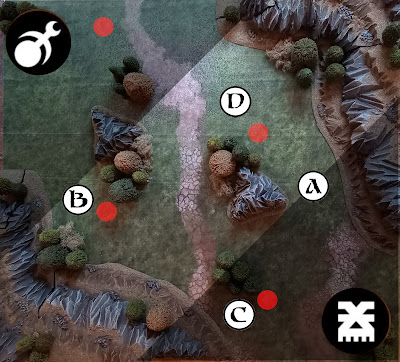 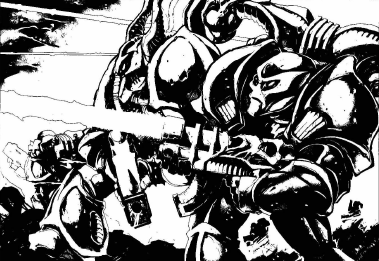 The precious information collected in the previous scenario oriented the invaders in direction of the spaceport. Indeed, some fleeing engineers reached to late the escape spaceship and stayed abandoned on their own planet. The toughest-ones quickly runaway to new hiding place, the weakest-ones stayed at the spaceport as such prey for the Legions. 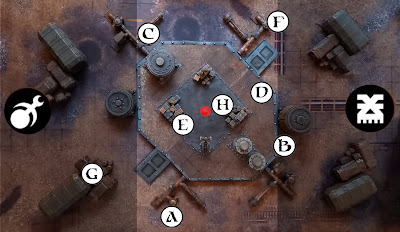 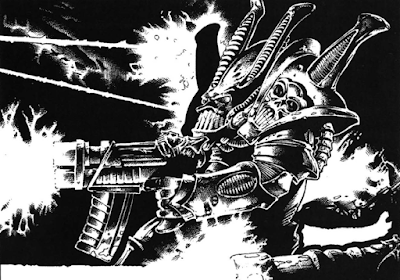 Drawn! Both sides tried out to pickup the Engineer but none succeeded, the unfortunate Squat ended  stamped by a Juggernaut and a Slaanesh mount. Chaos poetry!

The world Eaters protect the gates of a colossal refining plant from what it seems to be the last assault of their eternal rival. The riddle of refining is lost and none legion have local Engineering support to ran those equipements, the precious refinery must be owned in the name of their respective gods. 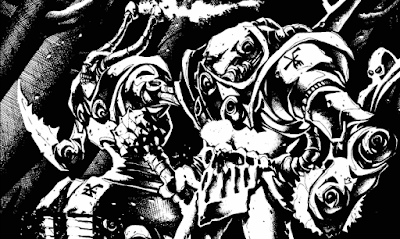 Skulls for the skull throne! World Earters are on top today and Slaanesh didn't succeded in his plan!

Such a good weekend! W40K 2nd ed set of rules is good, sometimes a bit heavy for close combat and vehicles damages locations. The overall feeling is good and the pleasure to play with so much great models overweigh any rule/technical drawbacks J Thanks Laurent for the visit!