To enrich the Hybrids lists of the Nexus Campaign (missions here), I developed a Genestealer Chaos Cult list, Slaanesh Worship. 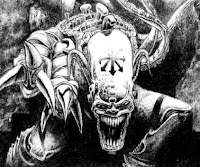 I used the Advanced Space Hulk expended Blip set to substitute the Genestealer Blip set. By this way I extended the original list of Hybrids and I integrated progressively some new troops at every scenario to represent the progressive immersion into the Chaos corruption.

To balance the games, the Space Marines Troops of the last scenario was swapped by three Grey Knight Terminators, one Librarian and one Inquisitor

Additional troops to the Nexus Campaign Hybrids lists :
Mission 1 : The Cryogenic area is kept  by a band of Brood Brothers and some Mind Slaves Gunners. All these unfortunate implanted Humans come from the crew of The Perseus or come from the ranks of the prisoners Slaves Workers.

Mission 2  : The Docking Bay sector is under control of a 4th Geneneration Hybrid rewarded by Slaanesh with a Chaos Power Armor. He lead a warband of mutants composed by some Beastmen, a Mutant Bomb and a Large Ogryn Mutant.

Mission 3  : The heart of The Perseus  is the adobe of the Patriarch  and the coven of the Genestealer Chaos Cult. This is the place of frequent dark rituals where summoned Slaanesh minions like Daemonettes, Fiends of Slaanesh and The Keeper of secrets.