Hello ! After the rush of BOYL 2019, I made a “hobby break” of several weeks … Now I’m back and I have a new project to achieved!


As the mythic Citadel Chaos range from the 80’s, the Orc & Gob range is pretty rich and purpose a large variety of models. Mostly sculpted by KA, this is a great classic for every Old School lead collectors. Do you remember the large battle scenes pictured in the White Dwarf magazine and reused in the WHFB 4th ed rulebook? I think these pictures are not innocent in my affection for the Green Skinz. 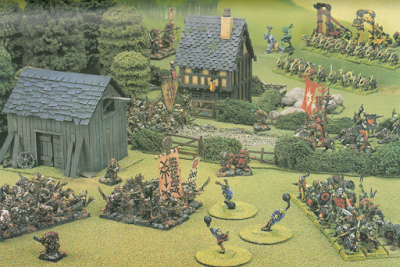 So, one more O&G army you’re going to say! Yes but I will apply on it an old and very good theme! If I tell you : Grivziz Dirtball’s, Sparrznatt's Suicide Squad, Claws of Malal, Dagrom Failbreath … You answer what? Chaos Marauder! Of course!

I’m a big fan of this cards game for a very long time. I particularly appreciate the way that the game illustrate the relations between the evil races of the Warhammer world. Very inherent to the three first editions of WHFB.   It’s an enjoyable melting pot of bad guyz gathered around their Chaotic alignment!

Orcish troops allied to Beastmen herds or Ratmen units. Sometimes leaded by High ranked Chaos Champion. An Orc Hero with his helmet marked by the Chaos star Is quit “normal”.  The game is sumptuously illustrated by John Blanche and the back ground make honnor to the GW studio from the 80’s.

I finish to collect my O&G army since 2011 but I never painted it. Probably afraid by the task and all the efforts implied by the project. To achieve this army, I decide to apply the same receipts than I had to used for my Skaven army.  Fast painting for troops to save times and focus on the shields and the banners. I already painted a large part of the army and planned to finish it around the middle of October. I don’t know how I will organized the up datting of the blog around this project but I will try to post picture soon.