Hello! First report of the campaign, the scenario is named BEATCHHEAD (check details here). I played this game with my brother as O&G Boss and I as Dwarf General. We used the ruleset of the 4th (5th) edition of WHFB with restrictions about the total of Magic Item points per characters, to avoid the HeroHammer syndrom.
But first of all... Why no picture Nico? I've had some technicals problems and I losted the majority of my pictures for the first battle, it left me some ones  but they're too crappy. So I Grabbed my best criterium and I drawed you the battle report! I hope you enjoy it? 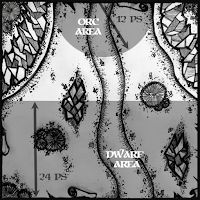 Ok for reminder, the aim of the mission for the O&G army is make a breackthrough the Dwarf battle line and setup a beatchhead for the rest of the Aaaagh.
In terms of objectives it look like this, the dwarves are defeated IF all their banners are captured OR at least 6 units of O&G are present in the dwarf area at the end of the 6th turn

Upper line, from Left to right : Wulfboyz, Night Goblins, Orcs and another Wulfboyz unit.
Lowner line, from left to right: Pump Wagon, Black Orcs with the General and the Great Banner. Snorta's and one Orc Chariot.
The vanguard totalize 6 units  and 2 War Machines.

Battle report
I prefer the short reports, also I splitted the battle in two parts. One picture for every parts, consider it's an overview of roughtly 3 turns per picture. 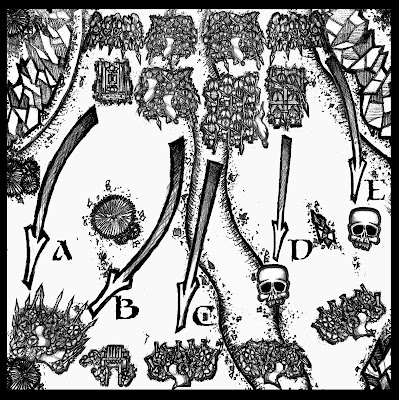 A & B : The principal unit of the Dwarf Patrol is striked simultaneously by the Snotling pump Wagon and the Black Orcs unit. After an Epic Challenge between the Generals (endding by a draw) the combat result was too much deep and the dwarves fail their breack test ... 2d6 impact Hits for the Pump Wagon... Wow nasty!
C : Befor their charge, the Snortas suffered from a hail of fire from the Organ Gun and the Handgunners. They finally reached the Dwarf line with less of half thir origal troops. They enguaged a long struggle against the handgunners... And slainned them until the last!
D & E: One more time, dwarf fire power make the difference. Orc Chariot was progressively destroyed by the Dwarf Crossbowmen and the unit of Wulfboyz was stopped in ony one turn by the Handgunners. 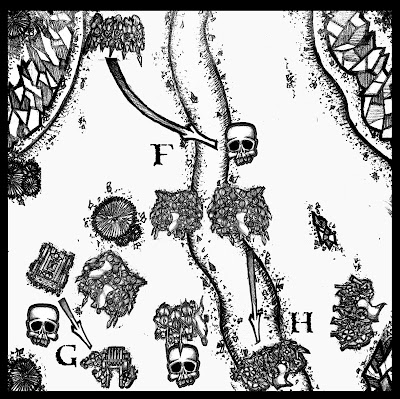 F: After some weirds and questionables movements, the last unit of Wulfboyz Fall under the fire power of the dwarf Handgunners.
G: The Black Orcs and the Pump Wagon Charged and slainned the crew of the Organ Gun.
H: In the last turn the unit of Orcs charged the Dwarf Crossbowmen and annihilated them but too late. Like The Night Goblins, these two O&G units take too much time to cross the battlefield to shift the balance in favour of the Greenskins vanguard.


Conclusion :
Although the O&G Vanguard dominate the battlefied at the end of the 6th turn, they lost the battle. Not enought Greenskin units in the Dwarf Area and still one Dwarf banner on the Battlefield.
During the last battle of the campaign, dwarves will add their reinforcement one turn earlier on the battlefield.


Next battle report will be pictured, no doubt! Cheers!