Heading north to do battle with a bunch of stunty little Dwarfs, is an awesome army bored and irritable Orcs. They grind to a halt every ten yards or so because of some petty squabble which he rapidly escalading into yet another tribal punch-up. The army's menacing leaders are quite content to let the goblinoids scrabble in the mud all they like, but if they ever get into battle formation it means that things are gettin serious. So one of the generals will intervene at that point, slap the wrists of every one involved (excepting those who have already had their glizzards slit) and get the wretches marching again... until the next time.

Until then, one of the clans will inevitably drive the others barmy with boasts of how it clearly came out on top, not necessary because the strongest but because it has finished with the highest status, stealing enought valuable stuff to make their rivals even greener with envy.  But who are these tribes?

Hak Veinthrob’s Volunteers :
This well-bruised fighting force has been assembled, harassed, and bullied by the mortifying Hak Veinthrob. This veteran has a tendency to go blood-burstingly berserk at the drop of a helm, which not only earns him a healthy amount of respect but also leaves him with a terrible hangover. This, of course, only makes him even angrier... 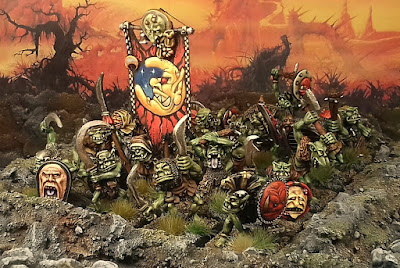 Grivziz Dirtballs :
Many years ago, one of the Psycho Orcs of the Dripping Canker first invented the game of dirtball. This exciting pastime involves a number of fresh Dwarf heads being kicked round a cave mouth (the Ggg’ Hole). The Dirtballs are constantly “striving for perfection,” hoping to develop a team to match the classic lineup of ’66 (1566 Dwarf Date). Leaders change when the team hits a losing streak; one of the players kills the leader and takes control. Ugmuk Mungrell, the previous boss, ended his thirty years at the top with the oft-quoted words: “Agghhh, you’ve killed me, Grivziz.”
Grivziz Dirtballs war chant "WE'RE OFF T' MAD DOG FOR SOME LOOT, DOO DHA, DOO DHA - C'MERE STUNTY 'N' TASTE ME BOOT, DOO DHA, DOO DHA DAY!' 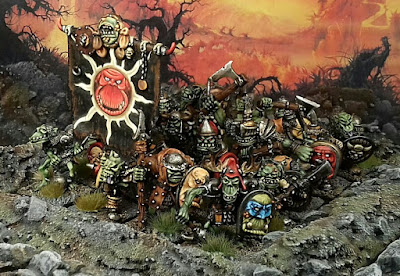 Spattznatt (an amazing Black Orc with remarkable control over his runt noshing’ urges) leads daringly impossible missions, succeeding through a mixture of guile, treachery, cunning, and then violence. You name it; kidnapping, murder, theft, Orc commando raids – he’s led them all. Aiding him in this is his famous suicide squad, who will give their all for success (Spattznatt himself has never committed suicide), and who are more than content to prove the squad’s motto: “Who dares usually ends up wiv his baubles stuffed down ‘is gullet.” 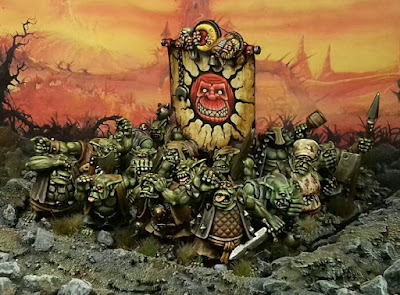 Bozlum Pigstickers :
Just south of Karak-Azgal, lost in the mists of Troll Stench, the Hole of Bozlum is inhabited by an especially nasty breed of Orc – the renowned Bozlum Bootboys and their even more infamous kin, the Bozlum Pigstickers. Uncannily accurate with the bow, the ‘lads’ (as they like to be known), have won many “daarts” trophies in the local swill pits. Indeed, some think the lads could even out-shoot the pansy Elves. 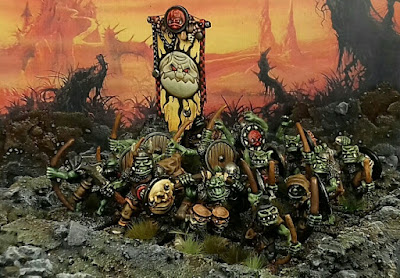 Blightskabb Plague Lords :
The Blightskabb Plague Lords are the Warlord Clan followers of the Skaven hero, Akzen Parasyte. In battle, these particularly twisted Ratmen fight as a group, overtaken by a fanatical battle frenzy. They can appear anywhere without warning, taking their enemies by surprise and cutting them into pièces. 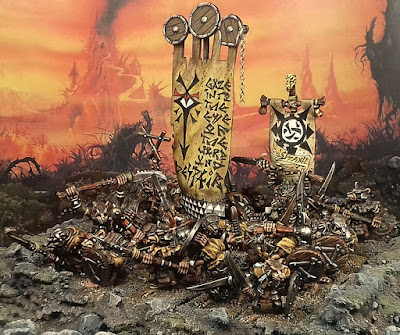 Claws of Malal :
This regiment of Chaos Beastmen worships Malal, the renegade Chaos God. They are more than willing to join in tribal disputes and annihilate the followers of other, lesser deities, while showing the purest form of Chaos to the rest of the army. 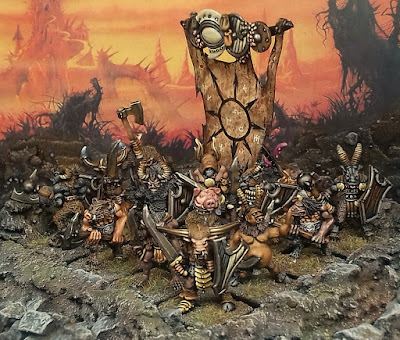 Always good for a laugh, these scurvy, wretched little slave units find themselves roped into most Orc campaigns; sometimes with promises of great rewards and more often with twenty feet of rope and a pointed stick! They are useless in battle, serving as mere cannon fodder to pad out the more valuable Orcish ranks. However, some provide other useful services for the army, such as the Whipping Post Mob or the highly skilled Nose Pick Brigade.

Some stupid, irritating little Snotling slave with a Welsh accent or another "I'VE GOT A POINT-ED STICK. AN' I'M GONNA YOOZ IT" 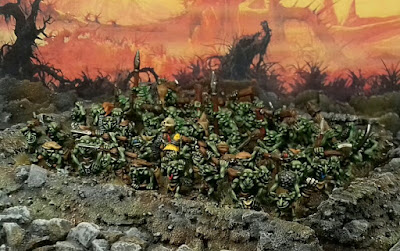 This wolf-pulled, armoured war chariot may seem formidable to someone being charged by it. However, it’s at least twice as disturbing for the Gobbos crew who are jolted half to death every time they ride in the flaming thing! 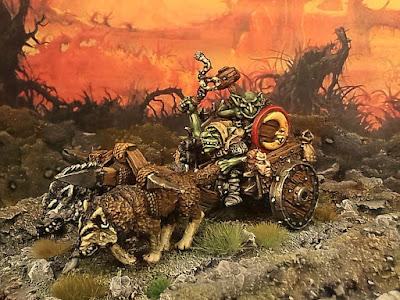 Chucker :
The average stone (or offal, flameball, and just about anything else) thrower takes about twenty large trees to build.
This may seem unimportant except that it is the cause of much fighting. After all, Orcs want to destroy, not spend hours carefully chopping up nice bits of wood for some addlebrained engine builder! 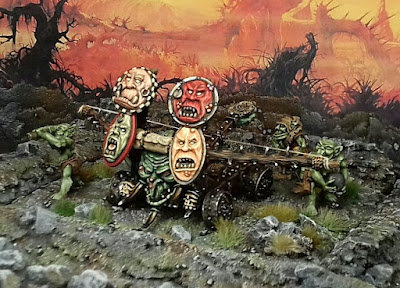 Smasher :
The “Smasher” is a very efficient cannon firing stone or metal shot. It is not difficult for Orcs to imagine the damage this thing can do to enemy battle lines, and it is more versatile than one might think. If ever the crew runs out of ammunition, they can stuff a few Crummy Snotling Slaves down the barrel! 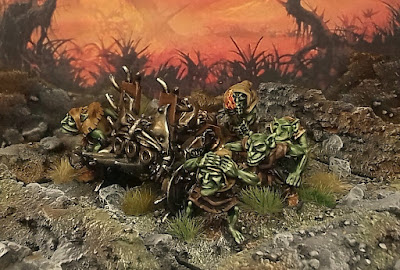 Ockee :
For most Orcs there is nothing more gratifying than to see some high ‘n’ mighty good creep taken down a peg or two by a large dart fired from this deadly accurate machine. (‘Ockee’ is a phonetic spelling of an Orcish word that means something along the lines of: “the place from which darts are thrown.”) 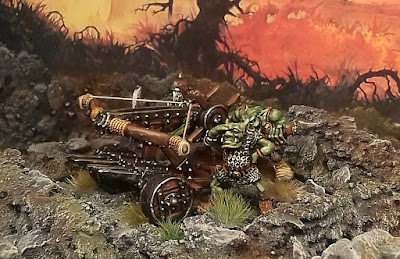 So that's all for today! Next post will be dedicated to the Characters and the special things like the Spoils, the magic Items, ... , lot of good stuff :) Cheers!