WHFB report: Clash of the vanguards 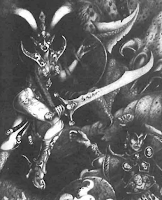 Hi everyone! First battle since the lockdown has lifted, three months without any game … rude! I played this game with my brother and we used the set of rules from the 4th/5th edition of WHFB. Both army count 2500pts and we apply several limitations about the total value of magic items per characters to avoid…. You know, Herohammer.


This battle is supposed simulate a Dark Elf invasion of land ruled by several Necromancers. Only the vanguards are involved in this first encounter. The result of this clash will give the initiative to the winner side for the next large battle scheduled for the late summer with a group of funboyz (GW Old-school-friendly). 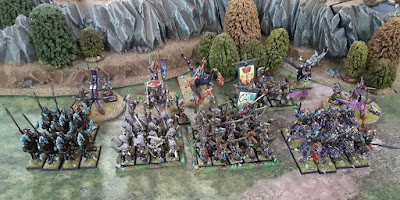 From left to right. Upper line : Bolt thrower, Cauldron of Blood, War Hydra, crossbowmen, Sorcerer on Pegasus and a second Bolt Thrower.
Lower line : Dark Riders, Witch elves, Corsairs with an Hero and The ColdOne Knights with an Hero. The General is inside this last unit. 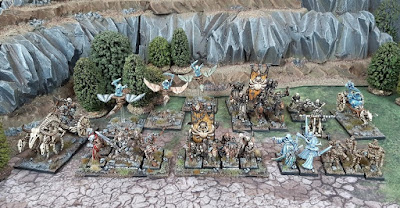 From left to right. Upper line : Carrions, Death Riders, Skull Chukka and a Chariot
Lower line : A second Chariot, Zombies with an Hero and a Necromancer Lv3. Skeletons with the undead General a Necromancer Lvl4. Wraiths and Mummies. 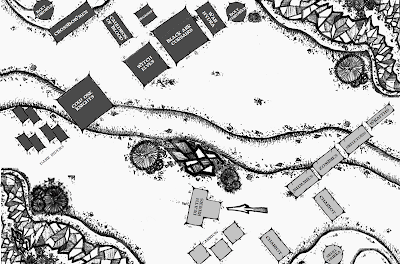 We played a scenario named “Surprise”, this is a “ranged battle” with a slight variation during the deployment. The first side that finish the set up his troops can move one unit (up to 4ps) for every units set up by the opposite side. It mean that if you have too many troops your opponent can move his troop meanwhile the end of you deployment. Here the Death riders moved up to 8ps. 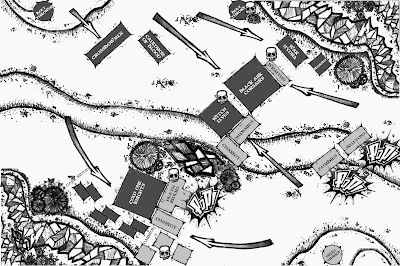 Shooting Phases : The both throwers were particularly inefficient at the opposite of the Skeleton catapult which hit the Cold-One unit and pulped 2 of them.


Magic phases : The Necromancers demonstrated all their power, boosted by several magic Items. They casted a continual flow of spells like “Summon Skeletons horde” or “Dance Macabre” to reinforce the units on the battlefield and help them to reach the combats. A key point of the battle appeared during the first magic phase when a tremendous “wind of death” crossed the Dark Elf battle line. It carrying a Bolt Thrower and made 5 wounds to the War Hydra.  After what, this spell was absorbed by a Magic Drain from the Dark Elf Sorcerer. This last one, tried to trapped the Undead General into the Aldred’s Casket of Sorcery, luckily she failed a fear test and finaly never reach the Necromancer. Sneaky Dark Elves!

Combat Phases :   The Dark Riders, the Cold One Knights and the DE General were mired during all this first part of the battle by the undead Chariot, the carrions and the Death Riders. Despite the Van Horstmann's Speculum the Undead Hero return to dust by the hand of the DE General, followed by all the other undead involve in this fight.


In the middle of the battlefield supported by several “Dance Macabre” the Mummies and the second Undead Chariot engaged quickly the Witch Elves who suffered of a load of wounds and failed their break test. The Chariot finally caught up them! The wraiths engaged the pack of Corsairs but even if they’re ethereal, they lost the fight by the combat result. They failed their break test and vanished in a fetid ghostlike smocks. 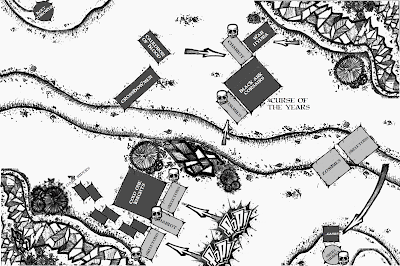 Shooting Phases : As the first part of the game the last Bolt Thrower never find the right angle to pay for it self. The Dark Elfes Crossbowmen were too far from the undead lines to made some damages. The Skull Chukka never hit as well as in the first part.

Magic Phases : The magic items of the Necromancers progressively disrupted by their over using. Reducing the flow of spell casting : “Summon Skeletons horde” and “Dance Macabre” to keep getting bogged down the Dark Elf Mounted troops. The Undead General casted a “Curse of the years” against the Corsairs… Only the standard bearer survived at the and of the battle.

The Dark Elves Sorcerer was particularly efficient to counter spell and find the power to cast some spells like “Soul Drain” and “Blade Winds”.

Combat Phases : In spite of heavy loss of the Cold One Knights, the DE General and the Dark Riders smashed up the last wave of freshly summoned Skeleton. They never reached the Undead command unit. In the middle of the battlefield the The Corsairs and the War Hydra resisted and finally defeated the Mummies and the Last Undead Chariot. The Mounted Dark Elf Sorcerer engaged the Skull Catapult and shattered to pieces the crew.

Dark Elves 11pts – Undead 8pts. Minor victory for the sons of Naggaroth. The Undead Magic phases were fantastic and I casted many Spells to boost my troops but the lack of powerful characters in close combat was patent. I have to integrate a Vampire Count for exemple…
I have to mention the dice were not on the side of the Dark Elf General but he finally kept a cool head and made the right choices at the right moment! Glory to him!