Good morning! Today we talking about the RT cover art, as I writen in my last post this illustration marked my youth. Yep, After painted less then 20 marines in the first step of the BatF project, the idea of a scenic base for them slowly make is way in my mind.

This is a great challenge to realize these scene and I was very enthusistic during every steps of the creation process... I hope you enjoy the result as much as me :) 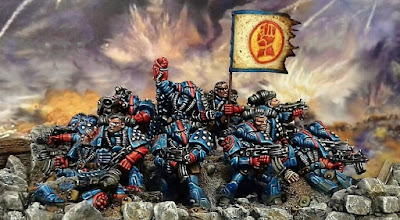 Cover art autopsy
Before starting, I had to understand the scene! I worked every day with the illustration (WD93 in fact!) on my work space to get all the subtleties of the scene. The last stand illustration is a mix between differents feeling like : Despair, suffering, self sacrifice and bravery. Of course, I don't pretend managed to retranscribe all these feelings in my work but I had them in mind during the cretion process.
The other important point is to capt all the characters of the scene, I describe them bellow. To finish, the last element who give all the depth of the illustration is the back scene : The dark sky, explosions and the shadows of huges incoming monstruosities.
A kind of futuristic WorldWar1? The Crimson Fist Marines interpreting the French soldiers in blue clothes and the Ork of Kev Adams as German soldiers. Interresting dont you think ?

The scenic base
The first step was to find a clear box to contain the scene and define the dimensions of the base. To creat the mound, I piled 25mm mdf round bases to creat different levels. Then, I filled the gaps with milliput and shape the mound. The highest point of the scene is in the central place of the base. I hidden the back border bases of the Marines in sort of small craters to accentuate the WW1 battefield spirit.
My own interpretation of the last stand scene take place in the ruined farm ... So, I used some Fugou KS sceneries to define the corners of the base. 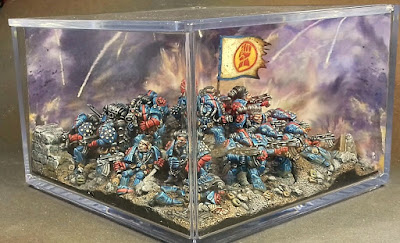 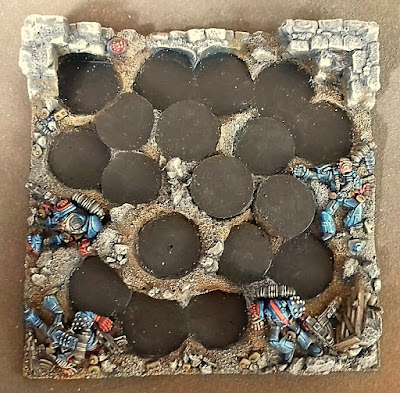 The charaters
Ok to make a good scene you need to capt the principal characters of the illustration and try to arrange them in the same situation. Here I created 6 characters with similarites from the original illustration.
Like the playable Marines, I added lot of bags around the belt of the wounded Soldiers to increase the "poilu" soldier spirit. Bandages and blood add some humanity and fragility to these soldiers, very representative of the first Space Marines (Only T3!) 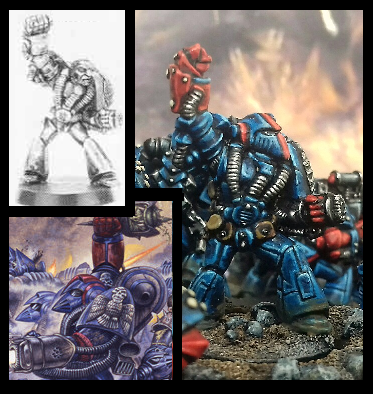 The central character of the scene is the Sergent, I volontary changed the side of these character to avoid the sculpt a Ork head in his fist. And because the Eagle on his shoulder pad is too crappy :) So, I keeped the original Marine Body, I slightly modified his posture. I added some greenstuf around his skinny thighs. And swap his face with a RTB01 Marine helmet. 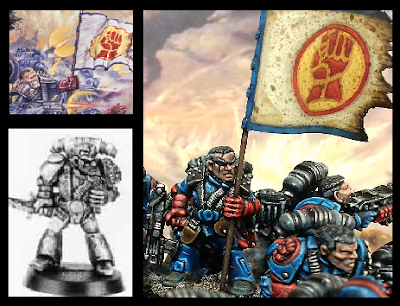 I love this model, his posture is perfect to represent the bavery. He standing front of the maelstrom. The scar on his face suppose he's a veteran, enough to hold the banner of the unit. I scratched the original shoulder pads and I sculpted news closer to the illustration. I swapped the sword by a Bolter. 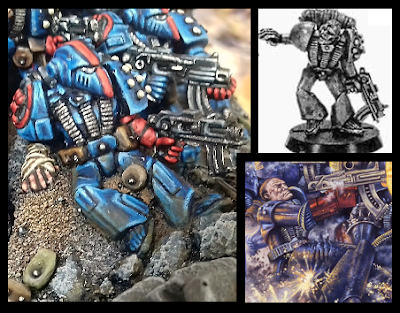 The original model is a Rhino Marine, I simply changed the posture of the arm with the Bolter, I added a helmet on his head and sculpted a bandage around his arm. The posture is inverted compared to the illustration but I think it nicely representative. 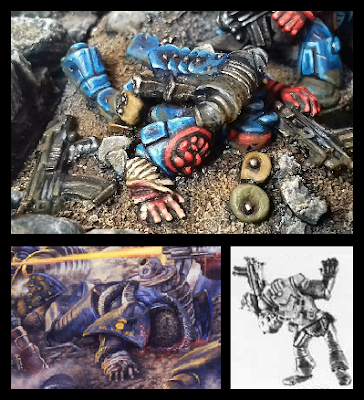 The original model of this dead Marine  is very closer from the illustration, I simply added a bandage around his wounded arm. Some bags around him. Maybe they contain amo or personal effects... 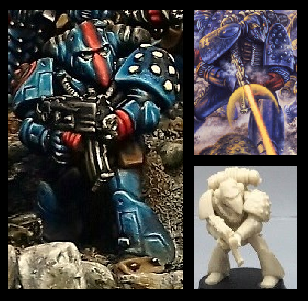 This Plastic Marine need some work to have a nice posture. I described it in my last post, I'm pretty proud of them because they have a very agressive posture. 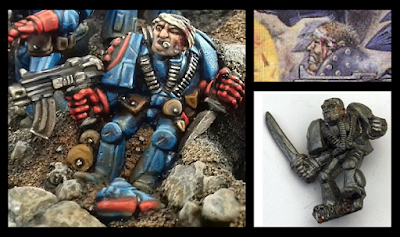 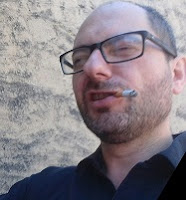 Yep it's me :) I'm in a bad situation,I'm wounded, I'm coiled betweens two craters and I understand that I'm living my last battle. I throw my helmet on the ground and I smoke a cigarette before the Reaper take me ... but I will selling my skin dearly!

This character is almost completly hidden on the illustration. I'm relatively free to use any models in the Citadel range. I decided to use a Christmas Marine, I simply added a bandage around his head and swapped his sword with a Bolter. 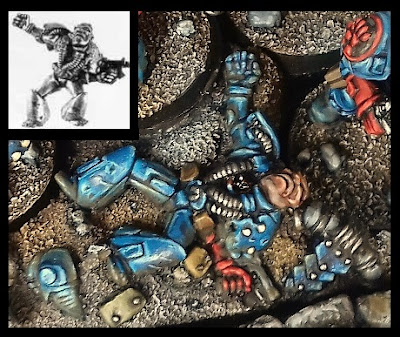 This Marines is a classic dead soldier no add on. OK the back pack and the helmet around him :)

I photoshoped the back scene of the illustration. I'm not a great numerical artist so Mr Sibbick please excuse me for the graphic slaughter. You can download it and use it for you own picture (approx. 40x17cm).