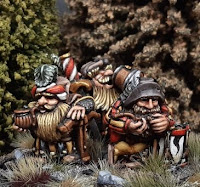 Hey! I hope you enjoy the lockdown in your dungeon and everything alright? From my side, I stopped the work at home and  now I'm in short-time working (chômage partiel) since one week.

I discovered a recent interrest for drawing maps. I know, there are applications online to creat these maps but I prefer whenit's Home-made! They add an old school flavor to the blog and add a new dimension to these reports. No doubt! It make sens for simultaneous actions on the battlefield, more maps and less words !

The Greeskins try to reapropriate a part of their lost campaign baggages. Dwarves leaders laying a trap to the Orcs troops, they use the baggages to force the Orcs  to go through the pass. This tight path is tactical advantage for the lesser Dwarf Army. The baggages are represented by two chariots.

The noise of the recent battles in the World Edges mountains awakned some cave dwellers. They're represent on the battlefield by this 1D6 Squigs and 1D3 Trolls. They are deployed at the begining of the game and move in random direction at every compulsary phase.

We played this game twice, indeed, the distance between both deployement areas were too long in the original scenario. More over, in the first game I built a classic Dwarf shooting list and the result was a one-way game without real interrest for O&G player. So we decided to play again this scenario with some appropriates corrections, 40ps between the battle-lines (check the scenario here).

Battle report
The report is splitted in three parts. Concider every map is an overview of 2 game turns. 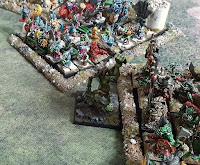 The first turns was perturbed by the Cave-Dwellers. Particulary when the green Troll move in direction of O&G battle line. Indeed, when he approched to the Night Goblin horde, 3 Goblin-Fanatics get out from the Gobbo ranks. The Troll fell under the blows of the Black Orc General who by the way dodging a nice Vomit strick! 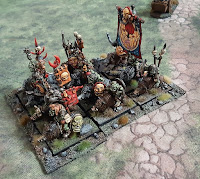 Inspired by their General, the Snortas 'll show 'im and charged the approaching Squig. Of course the monster fail his breacktest and flee. But the bad thing for the the Boar riders was the fail of their command test to avoid the pursue. It result their presence alone at the center of the battlefield. They suffered from a crossfire of the Bolthrower and the fearsome Organ Gun. None Snorta survived... At this points of the game the O&G lost 25% of their troops. 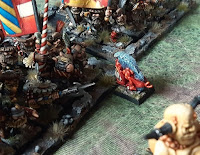 On the other side of the pass, the Dwarf battle line was less perturbed by the Cave Dwellers. The orange Troll quickly leaved the battlefield, meanwhile the blue Mohawked Squig was slainned by the Dwarf Hallebardiers. Dwarf Army advance as a pack and stay close to the General and the Great Banner. 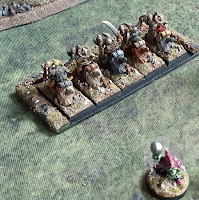 The O&G War Machines pounded constantly the dwarves troops but the frequents misfire not allowed the creation of a signifiant breack in the dwarf battleline.
Before strangling himself with his ball&chain, the last Goblin Fanatic stricking the Wulfboyz. Casualty were heavy and the panic seized the Goblin Wolf Riders. The Night Goblins unit kept their calm and made manoeuvres to reach the first chariot.

The Pump Wagon and the Giant Spiders charged the Ogres. The impacts hits from the Snot wagon make the different (as in the first battle) and Slain up to 2 Ogres. 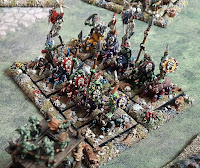 Althought the combat result was unfavorable to the Ogre, they benefited from the combined effects of the Master Rune of Groth One Eye encrusted in the Great Banner  (every unit stubborn at 12ps around the banner) and the CD of the General. In others terms, Ogres was Stubborn with CD10. The fight endded after several rounds, the low CD skill of the Goblins and the striking force of the Ogres finally incitated the Greenskins to flee, without pursue of the Ogres Hallebardiers. 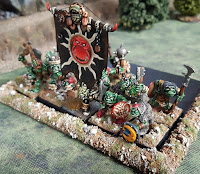 Despite the progressive decrease of his warband (Thanks the Bolthrower!) The Black Orc General brandished his blade and charged the Dwarf Hammerers. Characters attacked first, the O&G General bore the Dragon Blade (1hit =2hits) but got nothing!
Both units troopers were equiped with heavy weapon, Hammerers had a better Initiative and attacked before the black Orcs.

The Dwarf Hero present in the unit bore a Magic Item which permit to improve Skills of the unit (+1 to M or S or Armour save), It made the difference and permitted the Hammerers to finally win the combat. After several rounds the Black Orcs General, the Great Banner and the remaining troopers flee, without pursue of the Dwarves.
Meanwhile the Dwarf Reinforcement arrive on the battlefield and add 500pt of fresh troops in the balance readdy to keep the Orc Idol chariot..

Last part of battle, the Organ Gun raored again and renders harmless the Savage Orcs. These Frenetic troopers were finished by the Ogres. A shaman (lvl2) was present in this unit, Magic phases were not decisive for O&G firstly because the spells draw were unadapted for the context, secondly because my Runesmith bore an artefact encrusted by 3 antispell runes. And thirdly, the magic winds were rather quiet.

Conclusion
The advance of the Dwarf army in close orders and constantly inside the bubble of the General CD and the Great Banner effets, was successful. I strongly believe that the lost of Snortas unit was a hard blow and was the begining of the end for the O&G army. About the objectives, both armies controlled one baggage chariot. It mean the O&G army will add 150pts to it ranks for the last battle. 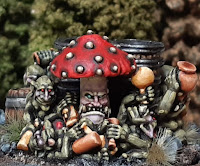 We waiting for the end of the lockdown to play the last scenario of the campaign, I'm looking forward to play this game. Meantime, I wish you a lot of great moments with your familly and nice hobby times! Take care :)