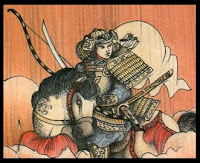 Here we are, the last part of the project! After 9 months of painting and historical searching to understand the feodal japan culture... I enjoy the moment of the army pictures :) to increase the army effect, I added some miniatures to the originals regiments, particulary for arquebusiers and spearmen.

Warhammer Nippon tactics
Leading a Nippon army, you have at your fingertips a unusual blend of devastating close combat troops, lethal missiles men and terrifying artillery. Despite this, it's a very difficult army to command properly. Because of the hight cost of all the differents troop types. They will probably be outnumbered , and so the troops must be used to their full petential to win.

The artillery should be used to support the close combat troops, rather than merely trying to wear down an approaching enemy. If they are carefully placed , artillery seriously hamper the movement of enemy regiments. Arquebusiers, if positionned behind cover, will be costly to overcome, but cannot be counted on to withstand a sustained attack from any number of enemy shock troops. The samurai are excelent archers, as well as good close combat fighters. It's worth trying to weaken the best enemy troops with bowfire before finishing them off with a charge. However, it would be absolutely disastrous to let them get bogged down and whittled away in an archery duel with large numbers of enemy bowmen.

The number of options available with Nippon army is almost limitless. Try to use a combination of protected arquebusiers and artillery to set up cross fires, and use threatened charges from the samurai to herd enemy units into these killing zones. The Kamikaze troops and ninja are probably best stationed in the weaker regiments, the enemy will then get a very nasty surprise when attacked!

So, what next? For the moment, I prepare the French Oldhammer Day. The event take place in my home town of Metz in the east side of France and it will be a part of a large event organized by my club Blitz57 (May, 12th and 13th 2018). Many oldschool games are planned during the weekend : WH40.000 2nd, Rogue Trader, Necromunda, Mordheim and of course WHFB!! Other good thing of the week end, it's the anual meeting moment of famous Oldschool French gamers... pictures soon :)