The road of Power.

I recently meet a Citadel collector who like me enjoy to play old painting miniatures and draw dices on heavy charts, some e-mails to select a date to play and it is the beginning of my new Chaos Champion and his warband : Darn The Blacksmith of Gods. (Narrative campaign without confrontation on board game.)

﻿ Let me tell you the saga of Darn… The quiet life of this blacksmiths rocked since the attack of his village at the borders of the empire. The Doom Riders struck the villagers as the hammer on the anvil… Many villagers died, the others were chained  and taken along through the snow-covered lands, their destination, black mines of Norsca.

﻿
﻿﻿﻿Now, Darn forges weapons and armours for its dark masters, those all are encrusted with black stones with greenish reflects. These stones are extract from the mine and as time passes in contact with these stones, Darn notes that other slaves, his companions in misfortune change awfully. But  Darn is blessed by the gods of Chaos, his body is more resistant but its mind sinks gradually in a chaotic dementia.﻿
Its destiny toggled once again when its Masters were attacked by an invisible enemy coming from the depths of the mines. The confusion of this nocturnal attack made it possible Darn to run away with his companions. They succeeded in seizing weapons and armors to be equipped. Darn has only one idea in mind, massacre its Dark Masters. 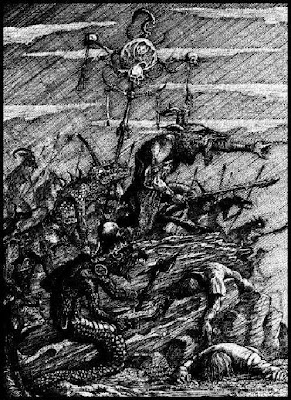 ﻿The tracking begins and leads Darn and his band more to North. They massacre without pity the runaways of the mines. The mutations become increasingly current but their corrupt minds don’t remarks them. Darn becomes naturally the leader of the group, his companions sense in him a capacity, a black force. They start to pray  gods of which they dont know their names but for which they are ready to pour blood. In reward, the divinities give to Darn  armors with dark and mysterious ornaments.


Darn finally found the last survivors from the mines, these Dark Masters taken into an  Orcs ambush. To their heads a dark wizard who had just time to chant some words against one follower of Darn who massacred it in return… Some minutes later the beastman transformed into slobbery spawn. Darn paid an homage to his gods and they rewarded him  by a weapon bewitched with the dark capacity.

His wandering brings it him and warband to return towards the old world, wood are their new den. They tighten many ambushes there, Darn makes run blood with flood and its gods thank it by filling it for many times him and its disciples. Darn can now forge armors by the prayer, his chaotic aura cross  the edges of woods and attracts new disciples.
﻿﻿
Darn Rewards : Black skin, hoofs, Magic Object and armour of Chaos (To Snorta).
Followers Reward : Atrophied extremity, Augment. Of carac., magic Weapon and limb transference.
Deads:  3 Beastmen and the spawn.

The armors forged by Darn become objects of cult, they are venerated by these disciples who see in them the evidence of his any power. The reputation of Darn  grow, it becomes “the Blacksmiths of the Gods” Champion of the Great Chaos. Its appearance becomes insupportable, its integral armour is able to accompany his mutations and its malformations, the ornaments of its armour change at sight of eye and reflect the horrible corruption of the Champion.


Darn Rewards :    Hideous appearance and Armour of chaos (To a thugs)
Followers Reward :  Coward and Augment. Of carac.