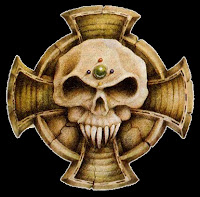 Hi !! Back home after a large week end at Newark. As usual, visiting Foundry miniature is a very good blast from the past and is a great source of inspiration for my next projects. This event is a great moment to re discovered all these Old Citadel painted models in the display cases scaterred in the shop. This is also the occasion to discuss with the super starts of the golden era of Citadel : Bryan Ansell, Rick Priesley, Nigel Stillman, John Blanche, Tony Ackland and  Trish Carden.

But to be honest, the most important thing for me during this event was to meet, chat and play with many many nice Boyz'n Girl(z) previously met on the web during the last years. Lot of good gaming moments and friendly times. Thank you all for this rain of kind comments about my works, thank you very much!


So, I purposed several missions during all the week end (8 games) and the Nexus campaign was the principal theme of the saturday.

Nexus campaign : First Mission - The Cryogenic Area
I played this game against a very Nice Guy named Paul Ede, He is a very good SH player and leaded perfectly his Marines to the Victory. This mission is very offencive for the Marive. His objective is to seal the only one entries of the genestealers. Four marines survived to the mission and joined the effectif of the last mission. Bravo Paul !! 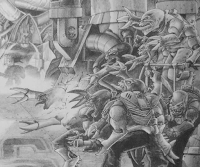 Nexus Campaign : Second Mission - Docking Bay
The Marines team was composed with Tammy, Paul and Pat. This is a very defencive mission for the Marines. They must defend the Control Panel of the Space Ship doors against my horde of Stealers and Beastmen leaded by my Champion of Slaanesh Vasilesnev Barchus. Three Marines survived to the mission and the Panel wasn't reached by the Stealers. Very good game with this band of friends very nicely advised by what it seem the veteran of the group, I named Paul !

This is the best gaming moment of the week end for me! I had the pleasure to play against a very cool guy named Steve. This mission involve for the Marine player to use 3 Grey Knights, 1 Librarian, 1 Inquisitor and all the surviving Marines of the previous missions. Very powerful you said!? Yes I agree but the last mission take place in the heart of the Space Hulk, domain of the Patriarch and place where commonly summoned several daemons of Slaanesh!
Steeve brillantly leaded his troop across the Space Hulk and resisted to all the horrible things hidden in the corridors the ruined vessel. The entry of the lair of the Patriarch was defended by The freshly summoned Slaanesh Daemon Zingeth SilentShade Keeper of Secrets .
The inquisitor gathering his last psy points in a devastating Blast attack who sent back the Greater Daemon into the Realm of Chaos. After this epic moment and exhausting effort, the inquisitor succombed to a sneaky ranged attack of an hybrid. The Ordo Malleus Lost precious troops in this mission and the campaign was lost by the Marines but honestly ... That was a great gaming moment  to see how a Inquisitor can banish a Greater Daemon. Thank you steeve!

In parallel of the Nexus Campaign, I booked some other missions, like This one. The objective of the mission is very simple (of course) for the Marines player. they must cross the map to reach the exit point. But some bulkheads are on the way... And some stealers...
I played this missions three times during the week end and as you can see on the map, Steeve and James was the team who pushed farthest  their Marines!

Side mission : Corruption's Heart
This is the first time I played this mission, the scenario come from a White Dwarf from 2018 and contain some new rules to play the Hybrids in Space Hulk. I use these rules because they are better for the game play then the older from the Genestealer ext.. As you can see, the protagonists are slightly Orkoids : Hybrids Orks vs Nobz Orks in Heavy Armours! The Nobz Failed the mission.