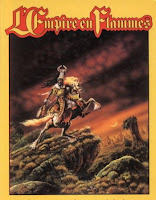 I prepare the next meeting of the French OldSchool Lovers at the Oldhammer Day in May 2019. So, my current Space Hulk project is planned to be presented during this event but I planned to run a WHFB campaign too. I will manage this campaign as GM and I share today some stuff I produce for It.


I named this campaign “L’Empire en flammes” and I hope that remind some good things for the RP Gamers who read this words. I created it with all the things I cumulated during the several campaigns I managed in clubs. I talking about the rules and models of course but I talking about management experience I acquire too! This campaign involve 2 groups of 3 players during 2 days. I used the Mighty Empires core rules (2nd ed) with additions and some transformations. And we play our games with WHFB 3rd ed rules. 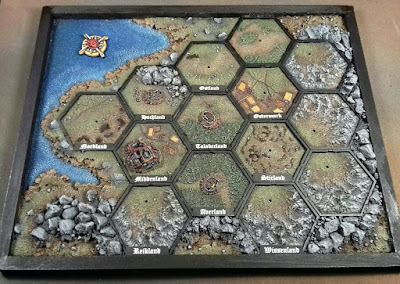 This campaign take place in the Empire territory during an invasion leaded by an Alliance of Chaotic Lords, they are opposed to the union of the last Defenders of the Empire. This incursion was stopped by the cold winter and the snow of the mountain passes. Only some territories separate the belligerents.  Now, the assumption of the spring coming and every Warlords prepare to lead their army for the next season of battle!

I was very inspired by the map of the Empire. I applied an hexagons filter on it to obtain this 3D map. I sculpted some markers for the Equinox spells and I copied some Mighty Empires models with Bluestuff molds. I’m always pleased to discover how the players love to play with these markers, particulary when they produce money to increase their troops for the next battle J I swapped the original Mighty Empire Dragon by a Man O War Hight Elves Dragon. I found it on ebay without wings to buy it cheaper. But It obliged me to sculpt it new wings. 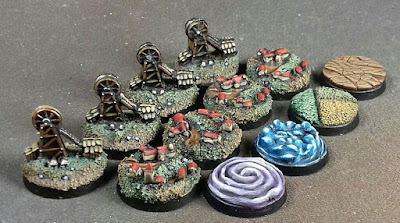 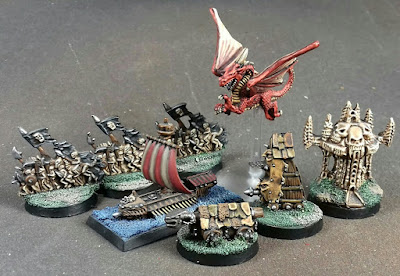 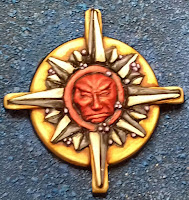 A last word (advise) for peoples who want to run a campaign. In my opinion, there is nothing sadder than a campaign without end. The most important thing for a good campaign is to finish it with a realistic deadline. No matter how it finish, the campaign must finish! And this is the job of the GM!
See you later for the battle report of the campaign!