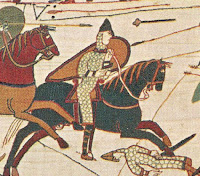 Long time since the last post but I have some difficulties to find the time to write on y blog. Final post for my Norman project, the most interesting part due to the profusion of colors on the helmets, shields, pennants and banners. I count 4 months to build and paint this army of 100 miniatures. 10/12 points for Saga and  2000pts of Early Bretonnians for WHFB with reinforcement of Vikings Mercenaries.

The Norman Duchy was ruled by a Duke, the first being Rollo. There were assisted by Comes (Counts) and Barones (Barons) and below them a large assortment of different feudal titles that encompassed all land owners. The Comes and Barones were the military commanders of the Normans armies. The Lords had at their disposal fighters who could also be senior land owners of their own, or household soldiers. They called Knights, and they usually fought on horseback, armed with lance or spear.  Between the 10th and 11th century, two changes occurred in cavalry equipment among the Normans that greatly increased their effectiveness.

The first had to do with the saddle, and the stirrup attached to it. During this period, the front and back of the saddle grew higher; providing the knight with more support upon impact when charging with his lance, and a more secure seat when being struck. The second innovation, this one a weapon's technique that would revolutionize cavalry warfare. The lance began to be couched under the arm, pressed firmly between arm and side. It’s tempting to suppose a correlation between the invention of this technique and appearance of the Norman knight.

Most of the Knights in picture here are bought on the Foundry Wargaming web site (Ex Citadel range) sculpted by the Perry Brothers in 1985. Only two knights poses and horses, so I converted Three dismounted knights to add diversity in the unit. I bought nine knights on the Perry miniatures web site (Crusaders range) to increase the diversity. Perry’s Norman knights from the past and the present!

Heraldry or not? In fact, this is the beginning of the Heraldry. During the 11th century, Norman knights are named “Fervestis” translated by “Those who are dressed with iron” because they’re integrally covered by different pieces of chainmail.  Add the helmet with it large nasal and the Norman Knight is totally unrecognizable on the battle field.

So we could easily imagine the necessity to create code to recognize who’s who. But this is the beginning of the heraldry and we are far from the sophistication of the late feudal periods.

To translate this early heraldry on my knights, I created a color harmony between their helmet, shield and pennant (when it’s appropriate).  Generally, Two colors on the helmet and two colors on the shield with one common color on them. The pennant have the three colors painted on the helmet and the shield (and sometimes I added a 4th colors). Here a picture of different pennants you can find on the Bayeux tapestry. 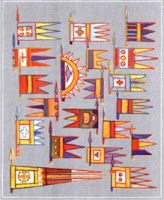 Many webstores purpose decals for shields but I prefer to paint my own.the Norman symbolic is quite simple : Cross, stripes,... The result is effective when you apply some battle damages on the shields to avoid the "brand new Knight effect"! Here a bunch of the shields I painted, 20 minutes for one pieces. 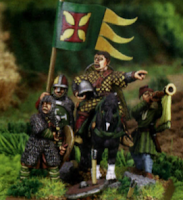 The lord base is generally bigger than the classic fighter of the warband, this the moment to create a vignette. So maybe some Dark Age wargaming fans have recognized him? I’ve been inspired by an old picture from the WAB supplement Shieldwall. The character is a footmen fighter, I patiently scratched the metal between his legs to tranform him in horsemen.

I painted some stuff to clean up my Norman leadpile. Two crossbowmen torso on Dismounted Knights legs. I hided the connection by with belt full of bags. The queen Mathilde goodies from Crisis 2016. And to finish two Fatigues counters from Perry Miniatures.